Splenda: Stevia – The Sweetest Thing You COULD Grow

Splenda unveiled a funny commercial to promote Splenda Naturals directed by Dan Jacobs. The advert was created by the advertising agency Humanaut with the tagline “The Sweetest Thing You Could Grow.” The main message is that Stevia sweetener is natural and plant-based.

For more details, you can read the below press release.

Consumers are seeking healthier lifestyles and products that contain less sugar and more natural ingredients. They view Stevia as natural, and other sweeteners that contain it have become increasingly attractive to them. But the top sellers are actually blends, and people don’t have much recall when it comes to Stevia brands. Heartland Consumer Products, the maker of Splenda, saw room for a 100%-natural Stevia entry in the market, so it created one that looks much more like real sugar and has no aftertaste.

Humanaut’s humorous, TV, radio, digital and social media spots school people that Stevia is the name of the plant from which the all-natural sweetener is extracted, not some chemical. In the 30-second TV ad, the central component, we’re just hearing about the all-natural sugar substitute when the lead actress learns that Stevia is a plant from the voiceover. She suddenly breaks character. “Wait a minute, if Stevia’s a plant, what’s stopping people from growing it themselves?” she demands to know. This idea then escalates to scenes of people showing off their new home-based hobbies.

Rather than feel relieved they can sweeten their drinks and baked goods with Splenda Stevia, the ad subjects rebel to the intel by cultivating their own Stevia stashes in mom & pop gardens and basement labs in a 60-second version. One guy brings a home-grown baggie of Stevia to a diner so he can sweeten his own coffee and a mom brags about her son’s closetful of crops. Throughout, the VO tries to inform them that Splenda uses the sweetest part of the leaf and already grows the best tasting Stevia so they don’t have to, as they insist they have bested the brand. “Take that, Splenda!” one dude says. The tagline: “It’s the sweetest thing we could grow.”

“Like a lot of Humanaut’s work, it has a sense of self awareness—we know we’re a large corporation making a commercial and we’re having fun with that format,” Humanaut Founder and Chief Creative Officer David Littlejohn said. “It starts off as a traditional commercial, then crashes with people interrupting and sticking it to the man. But the bottom line is it would just make more sense to buy Splenda Stevia than to go to all the trouble of making it yourself.”

The 6-, 15- and 60-second versions of the ad were designed for digital. Radio ads feature scripted banter between DJs where one host attempts to read the “straight” ad copy while the other annoyingly interrupts to ask about growing his own Stevia.

The campaign’s main target comprises existing Stevia users who are health enthusiasts and lead active lifestyles. Splenda hopes to educate them on the brand and category to inspire trial.

In addition to Humanaut’s creative, Splenda has redesigned the packaging and plans to sample products to increase trial and educate people about Splenda Natural Stevia’s pure ingredients and better taste. The company contains naturally occurring erythritol and Stevia as its only ingredients and uses a different process to extract them from the plant.

“The sweetener category continues to evolve, and we are bringing a creative twist to the category that enables us to differentiate our brand,” said Ami Krishan Senior Marketing Director on SPLENDA®Stevia. “The campaign idea is a playful nod that Stevia is a plant and at SPLENDA® we have done all the hard work to deliver the best tasting product so you don’t have to have to grow your own—but you could.”

“This project lends itself to our mission, which is ‘Getting good things inside people’s brains,’” Littlejohn said. “We feel like Stevia is one of those good things [countering] the massive problem of sugar and concerns with artificial sweeteners. This was a really good chance to clear up misconceptions about Stevia and point people to the best-tasting Stevia.” 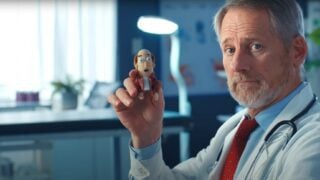