The 60-second Hyundai Super Bowl commercial titled, “History of Evolution,” finds Jason Bateman in different historical eras explaining how initial inventions got better over time. The ad showcases how the IONIQ 5 represents the advancement of the electric vehicle comparing it to the evolution of human language, navigation, phones, and televisions.

The second spot, “Campsite,” is a 30-second ad that highlights IONIQ 5’s vehicle-to-load function that can power equipment to make camping much more comfortable.

The IONIQ 5 marketing campaign was developed in collaboration with Hyundai’s agency of record, INNOCEAN USA, while its media agency, Canvas, coordinated the media buys.

“IONIQ 5 is the ultimate proof point of Hyundai’s evolving journey to deliver innovative, zero-emission electric vehicles,” said Angela Zepeda, CMO, Hyundai Motor America. “IONIQ 5’s breakthrough design, advanced technology, and more than 300 miles of range represent a significant leap in what it means to drive an electric vehicle. We used humor in this attention-grabbing campaign to compare the IONIQ 5 to other advancements humans have made.” 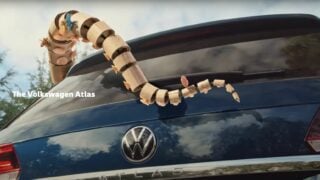